Qatar crisis – There is no crisis – We won!

Further to MB’s comprehensive and quite deadly ‘Qatar/Gulf Crisis’ update blog post of recent days, MB now brings further joyous news to all. If heretofore, followers had considered that there was still a lingering, albeit minuscule, smell of crisis in the Gulf air, MB is most pleased to inform all that the air is now mountain-fresh and rosy-smelling. In Qatar at least, the crisis is, alas, no more. Yes indeed, dear faithful HX followers, the flowers are in beautiful bloom and Qataris are walking about their homeland collectively singing ‘The Hills are alive, with the sound of music…….’.  Etc. Etc.

And how are you in a position to report such a momentous change MB, when only a few days back you were like a child at Christmas at the sight of some free-range Irish eggs for sale in your local shop?

Well lads, MB did also report in his previous post that Mohammad & Fathima Al Qatari were back on the highways driving their sports car toys and 4x4s, and that there was a pervading feel-good je ne sais quoi back about the Doha desert landscape.

And in recent days, joy of joys, Qatar has provided the absolute coup de gras in crisis-busting news to its neighbours and the world at large. Yes, folks, some Qatari businessmen have gone and bought a samba dancer for a world record price of Euro 222,000,000.00. That’s € 222 Million for those who find it difficult to follow all those zeros (or USD 260M). And in addition to his Brazilian samba prowess, the guy can also play some football. So the Qataris will force the manager (who they own) of Paris St Germain FC (who they also own) to allow the guy  (who they now own) to play in the glory-grabbing striker role for the club.

In addition to relieving the pockets of the Qatari businessmen involved of some chump change, the news is also a poke in the eye of the blockading Gulf neighbours, whose citizens, to a man and woman are Barcelona FC followers, and who are now reading of the great Qatari dancing/football coup over their foie gras and humus breakfasts, in moral (or actual) breach of newly introduced laws in those countries against support of any sort for neighboring Qatar, and its 15-years-in-jail provision (seriously).

So all is well in Qatar. We (MB and the general citizenry of the nation) look forward with much relish to the samba/football season ahead!

The bank transfer slip that transferred the cash from Qatar National Bank to buy the samba dancing Neymar from Barcelona FC (how do you access these confidential documents MB??? Sorry lads, can’t say). MB refers followers to the Green arrow below : 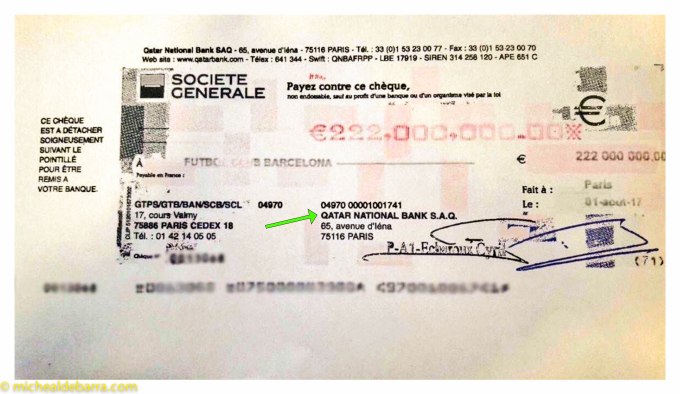 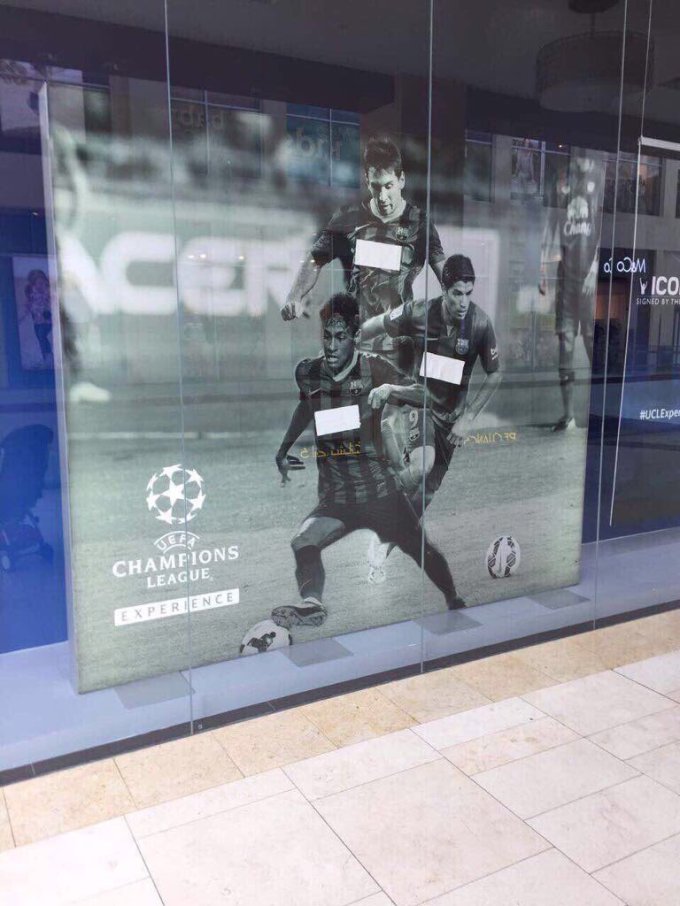