The Islamic feast of Eid al Adha (Feast of Sacrifice) takes place next week. In the week leading up, Muslim families will travel to the animal markets to select their particular sheep or goat (normally). So maybe not an ‘everyday moment’ throughout the entire year, but the buying and selling of animals is an everyday moment for that particular week in the Middle East and throughout the Islamic world, for many hundreds of years past. 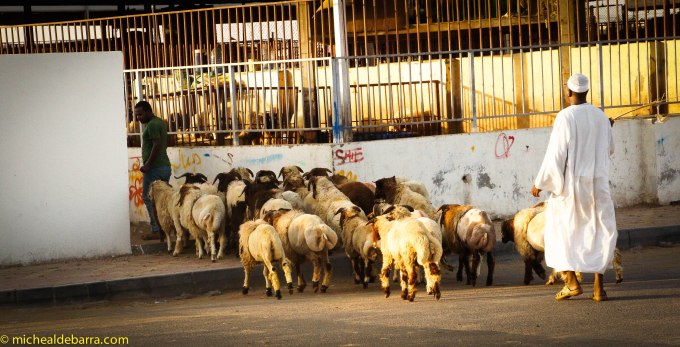 Eid mubarak to all lads.

The Islamic religious holiday of Eid Al Adha is the nearest thing that Muslims have to a Christmas. It’s a great family occasion and a big meal is consumed. It is a religious duty of all Muslims to sacrifice an animal at this time, normally a sheep or a goat. Cows, cattle, camels and others are also used when groups or extended families may pool together for the purchase of larger animals. The sacrifice is to honour the story from the holy book when Abraham gave thanks to God for sparing his son, after God had earlier tested Abraham by asking him to kill him. Abraham then killed a sheep as a sacrifice in thanksgiving. The same story appears in the Christian Bible, albeit both books state different sons names (Ishmael in the Quran and Isaac in the Bible). END_OF_DOCUMENT_TOKEN_TO_BE_REPLACED

But At The End Of The Day (Eid Al Adha)

I’d rather be a Muslim than a goat

If I only could

(From the song ‘El Condor Pasa‘ by Simon & Garfunkel – http://www.youtube.com/watch?v=pey29CLID3I – if you want to take a listen)

END_OF_DOCUMENT_TOKEN_TO_BE_REPLACED

The Idea
Have decided to post a photo per day for 30 days, each based on a word or theme. Feel free to offer a word or theme challenge to MB in the comment box below.

Photo 7/30
Thanks to Blogger – A Silver Voice From Ireland who posted earlier today on the occasion of ANZAC Day (nice read – http://thesilvervoice.wordpress.com/2014/04/24/anzac-day/#comment-2546).

In her post she mentions that approx 3,000 Irish-born (amongst the British forces) lost their lives in Gallipoli, more than the number lost by New Zealand (some 2,700 from my research).

When I was in Istanbul 2 weeks ago I looked into taking a bus trip to Gallipoli but it was a 5 hour journey away, and time (as well as a 13 year old daughter!) just did not permit. Met an Australian lady who was heading onwards in that direction and she was hopeful of attending the morning service on the beach – which I think is now a ticket-only affair.

The capture of Istanbul was the main reason the allied forces invaded but it was repelled by the Turks. More than 100,000 men lost their lives over the ensuing months and more than that number again were badly injured.

War is not nice!