Thanks to Anne Christine for this week’s Creepy challenge.

If you go down to the woods today,

You better not go alone……

END_OF_DOCUMENT_TOKEN_TO_BE_REPLACED

Thanks to Amy for this week’s layered challenge.

MB’s It’s the Weekend post of a few days back featured a shot of an old train that MB took some years back in Sri Lanka; 2013 to be exact. MB was on an overnight train journey from capital city Colombo to a hilltop village called Haputale in search of Lipton’s Seat; the seat that owner and founder Sir Thomas Lipton had installed at the top of the highest peak on his Lipton’s Tea Plantation, where he would come of an evening to relax and reflect on life and tea-growing. MB managed to find the seat and sat in it and gazed for a long time out over the hills and tea plants that stretched as far as the eye could see one beautiful Sri Lankan August evening. The icing-on-the-cake was drinking top quality Orange Pekoe black Sri Lankan tea from the little tea hut that lies close to the seat, for the benefit of travelers who make the journey. MB wrote a post about that trip to Haputale entitled Time for Tea if followers care to read.

MB had paid some extra shekels for a sleeper carriage on the overnight trip to Haputale, the journey being some ten hours or more. However, the term ‘sleeper carriage’ seems to have a different meaning in Sri Lanka than elsewhere; a wafer-thin foam mattress of no more than 3 or 4cm not affording much sleeper softness from the bone-hard plywood underneath. So upon sight of some sunlight in the very early morning hours, a very tired MB alighted from his bed-coffin, not having had a wink of sleep since boarding the train many hours previously, and meandered out to the train corridor to view the surrounding countryside from the corridor window.

And what a multi-layered early-morning sight to behold: 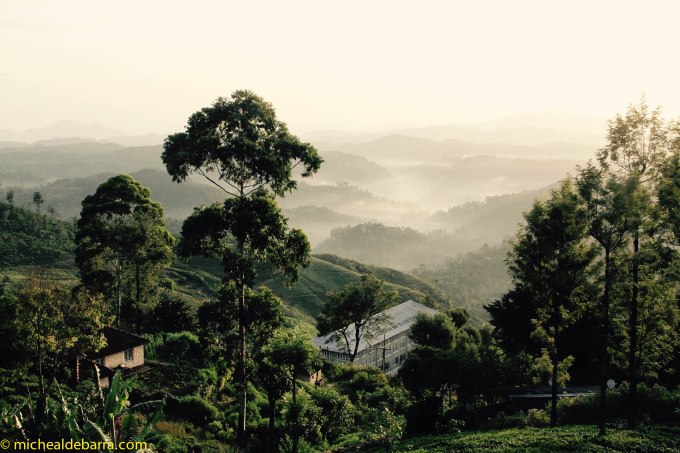 Time for Tea – next to Lipton’s Seat some 30 to 40 minutes drive by Tuktuk from Haputale: