Thanks to guest blogger Miriam for her Reflections challenge this week. Readers can view her post HERE and a little bit about Miriam herself and her Showers of Blessings blog site HERE. A very active lady for sure.

And so to MB’s challenge selection.

MB could have selected something from his HX lake back home as he has many deadly reflection shots to chose from, had he wanted. However, knowing that there will be many nature reflections amongst this week’s offerings, MB decided on something a little edgier.

MB spent two years working in Riyadh, Saudi Arabia, from 2012 to 2014. Riyadh is located in the centre of Saudi Arabia and has year-round blue skies and very hot temperatures. Occasionally, in December or January mostly, it rains. And when it rains, the skies release it in bucket-loads. Within 15 or 20 minutes, streets can become dangerously flooded with very high levels of rainwater. Roadside gullies rarely work, as they become clogged up throughout the rest of the year with fine blown sand, even if the street happens to have any gullies at all. So the rainwater has nowhere to go, and it can be a few days later when the flooding finally disappears through the return of hot temperatures and evaporation.

The arrival of rainfall sees many getting out their cameras or phones to capture the moment, such is the novelty of it all for locals. MB captured the below shot one wet Riyadh night just outside his hotel, in December 2012, when he was behaving just like the locals. When in Rome…………….! 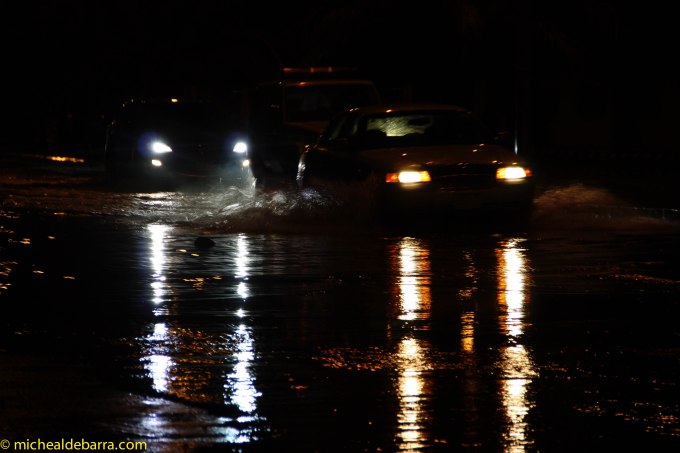