Yes. That’s what MB said. Politically. Incorrect. Soap.
Just for pig iron, MB turned to Young Sudani Lad one hot sweaty-underarm sunny mid-afternoon in Riyadh and asked a question. The thermometer in the office had many months back ceased all cooperation, as the Saudi sun burnt everything under it’s roasting red rays to crispy cinders. The A/C unit protruding through the external wall made a sort of squaking noise, as it struggled to perform the function the German God intended. Like a chicken in the clutch of some hungry chicken eater whose hands had gripped it’s neck and commenced the twist. See also song of same name by Chubby Checker!

‘YSL. Have you ever heard of a Gollywog’? asked MB. ‘No’ replied the college educated IT & Telecoms expert YSL, ‘what’s a Wollygog’?  ‘Well YSL, a Gollywog was a children’s doll long time back in the western world, originated from some story book from 1890 or so. But went out of fashion because certain white people thought that dark skinned people might be offended by the sight. MB can remember a TV tea commercial from his younger days back home which featured a dozen or so dancing Gollywogs. But it’s all no more YSL, on account of what some white breads thought most of the brown breads might think’, explained MB as briefly as he could. ‘Well damn those Whities for keeping that toy from us MB, snorted YSL, all indignant, ‘more first world Whitie nonsense I’m thinking’.

MB proceeded to google ‘Gollywog’ and showed the pics to YSL, who considered the dark-faced dolls sort of cuddly. And even a possible replacement for YSL’s teddy bear. If any could be sourced. ‘Can you get me one next time you are home MB? asked YSL. ‘Just not possible anymore’ replied MB, ‘they’ve gone the way of the Dodo and the T-Rex. Finito. Khalas’. ‘Sad. Truly sad’, replied YSL, as he shuffled off to another office to kill some more of the murdering afternoon.

MB recounts the above encounter, not because he has any strong feelings on the Wollygogs. But merely to consider the whole business of being PC or not. To be or not to be – that is the question, as some first world Brit with too much time on his hands once proclaimed. Being PC is not, never was, and never will be, one of MB’s endorsements on LinkedIn. Bit like Barak Obama’s explanation of bugging Angela Merkel’s phone, except his reference was only to the present & the future.

One of the things that MB likes in particular about the Middle East is the complete lack of PC in daily life. Great fun on occasion. You are a Pakistani in a villa with a room to spare. You place add on some local website or newspaper:

‘Pakistani, from Lahore district, required to share villa with other Pak/Lahore natives’.

Anything goes. One could, in theory, even see the following:

Overweight Jewish gentleman, aged 18 to 25, former Muslim or Christian out of Jeddah/Rome, interested in collecting pork recipes, required to share………………..

Well, maybe the last one above is bit of an exaggeration (the bit about ‘former Christian’ anyway!) but truly, almost anything goes. Two cases in point from adverts MB looked up only today: 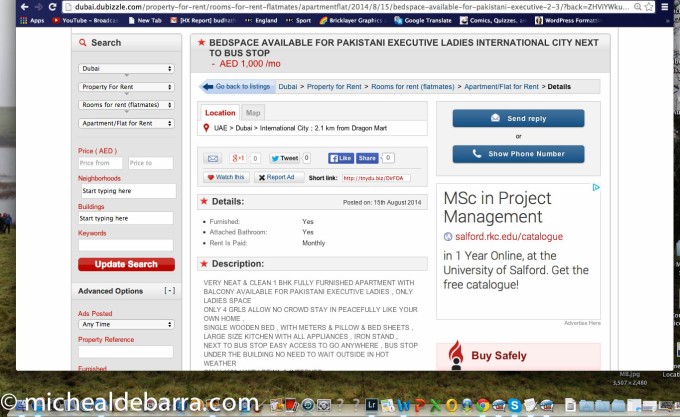 Most adverts for rooms to rent out these parts will actually specify the nationality (eg Indian), possibly a sub-nationality or State (eg Kerala) and the gender, in addition to the weekly rent, location and the other normal stuff people back home might expect to see. If a person of another nationality were to answer that advert, they would be politely (or not politely) told ‘NO’ – did you not read the advert? – Kerlites only wanted. “What’s that pal? You’re from New Delhi. Forget it Saji. Go find some of your own to bed down with”.

MB has, on a number of occasions, asked the different nationalities why they only advertise for their own kind where accommodation is concerned, and no other. ‘Because they smell and their food smells‘ is a non-PC answer given by virtually all nationalities. Seemingly everyone smells. And MB is thinking, well if everyone smells, then everyone is the same, and what’s the problem?!

But the more logical answer from many is that someone from your hometown will more likely fit in and get along with everyone else in the house. And not cause any friction. There is obviously huge diversity of nationalities out these parts with various backgrounds, religions, languages and education levels. No point making a tasty pork breakfast for everyone in a house full of Muslims. Or talking Farsi to a Hindi speaker. The law completely allows non PC tenant selection. Or rather the lack of any relevant law allows it. And in the scheme of things out these parts, makes perfect sense.

MB often receives CV/Resumes for job positions. 99.9% of CVs will have a photo of the person in question. Normally a photo of them well groomed and dressed in business attire. It’s not uncommon for the ladies in particular to go to the hairdresser and elsewhere to get a makeover before the CV photo gets taken by a professional. And then adding a little Photoshop enhancement. If the photo gets you as far as the interview….. is the thinking. Far as I know, requesting photos on CVs back home can get you a 10-year jail term. Or worse. Not the done thing. Not PC & totally taboo.

And what of the humble bar of soap? In the West everyone is looking for the magic formula to give a nice tan on the pale skin. But out here in the ME it’s the opposite. MB got much amusement, on entering pharmacies in Riyadh in particular, to see rows upon rows of soaps from numerous manufacturers promising to clean that ‘unacceptable’ dark skin into a much whiter brighter lighter hue. And the advertising on the wrapping did not hold back. Allah u akbar – regular use of this soap can turn you into something totally different. Funny thing was – MB did not see many dark skinned people in Saudi. The locals are mostly Bedouin in origin with relatively fair complexions. So a relatively small number must be the cleanest people on the planet. And getting whiter by the day it seems!

So being PC is not on the agenda in the ME. Never even existed in the first place. Long may it continue! 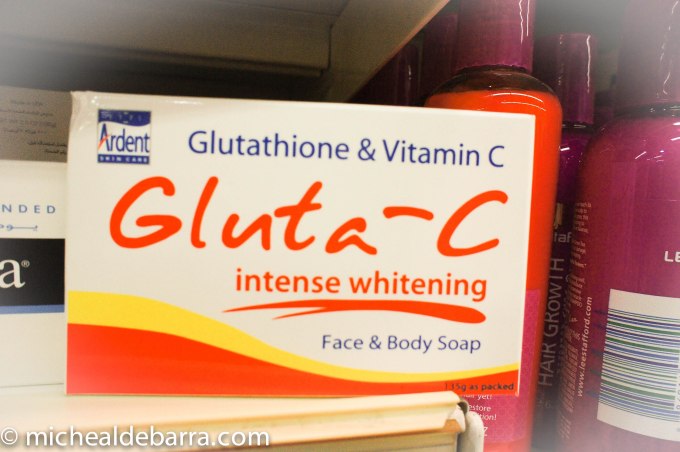