Cat was awoken from his sunlight slumber by a staff member clearing the table, following departure of MB moments before. Phillipino staff-man shouted anti-cat obscenity at Cat in his native tagalog, and Cat had the good sense to make hasty exit from the scene. Moments later Cat found himself in the delivery yard at the back of the mall, where trucks deliver supplies at various times of day and night, and other trucks remove packaging and waste. A small open back Toyota pulled out of the yard and Cat sprang with minimal effort onto the open back, settling invisibly amongst the bags and boxes.

The Pakistani truck driver liked cheap cigarettes and Cat caught an occasional whiff as the smoke wafted through the open drivers window en route to the cargo area of Dubai International Airport, where Pak-man would pick up another delivery for the mall. Dubai airport is called DXB in airport language and is a mega sprawl modern airport that covers many hectares in the Deira area of the glitziest Emirate of the UAE.

The taste of the free fish that Cat had eaten hours earlier had long disappeared and the pangs of cat-hunger would soon come. A pleasant aroma of food made its way from a nearby location and Cat went to investigate what lurked under some protective covers. A number of pallets as it happened, but each was plastic wrapped with heavy-duty multiple layers, and a cats paws and claws were not nearly lethal enough to access what lay beneath.

As Cat contemplated his next move he felt his world spin. An electric forklift had arrived as soundlessly as a cat landing on its four softly padded feet, placed its prongs under the entire load and within seconds had transferred it to a moving platform of some sort. ‘WTF‘ said Cat to his inner self. Cat froze in place, keeping his place amongst the pallets, and could do nothing, except hope for the best. Loud mechanical noises filled his senses over the next number of minutes, and finally the sound of an automated door clicking shut. Silence. Cat didn’t yet know it, but he had stumbled across four palles of pre-packed microwaveable airline dinners, and was now on board Flight CCA 235. ‘Please fasten your seat belts and listen carefully to the following safety announcement‘ said a Chinese voice in the English language somewhere in the muffled distance. Cat did exactly as he was told, tucking even tighter under the warm sheeting, and seven hours later touched down at Beijing International, in the heart of the People’s Republic of China.

The flight had been kind to Cat and he had gorged himself on the left-overs from the business class cat-less passengers. Would that life was always so kind, thought Cat to himself, as he made good his escape minutes later through a hole in the airport fence.

Beijing airport is a long way from the city and once clear of the airport security zone Cat had a chance to get his bearings and take stock. Seems like meeting that white guy in the cafe yesterday afternoon was the start of something different. Much as I stared into that guys eyes, though Cat, I just couldn’t read his brain. Whitie was playing mind games with me, thought Cat. I tried to play back and lost.

Looking around Cat realised that all the signs were in some strange script totally unlike this beloved Arabic back home. ‘I wont even be able to read the road signs in this God-forsaken land’ thought Cat as he started to sweat just a little under his warm fur coat. Just then, providence. Or so Cat thought. A local cat passed nearby. But this cat had a hungry killer-look on his face as he zeroed in on a local rodent mere meters away who hadn’t long to live, or so it seemed. Cat muttered a friendly meow hello, but local cat replied in local Mandarin cat language and Cat had no clue what local cat was saying. More of the same, or worse, followed from local cat seconds later, as local cat realised that local rodent had used the mili second distraction to disappear (forever) from the scene. Time to get to hell outta here thought Cat, I’ve read in cat library most cats out these parts are martial artistic type cats, who can kill you with just an evil thought, let alone a blow of a paw to a vital cat-organ.

Cat bolted down the street like a bat-cat out of hell. And that’s when Cat entered another hell. A worse hell. The worst hell he could have ever imagined. Cat had once read a weird book called The Road, and he seemed to have just entered one of the weirder chapters. A gory hell, full of dead cats, with no fur, no paws or claws and minus their heads & tails. Rotating on timber skewers over open fires beneath. The aroma of burning cat flesh made Cat’s fur crawl. He gazed transfixed in shock-horror from the safety of some boxes lying loosely on the pavement, out of view of the cat-meat sellers, who were doing brisk cat-meat-eating business with local cat-meat-eating humans.

Cat escaped quietly down a narrow side-street, coming out at the other end just as a bus had stopped to pick up some waiting passengers. Cat jumped into the undercarriage and found a place to rest safely as the bus departed Hellsville.

Within an hour or so the bus was outside the city limits and the smell of grass and trees cleared Cat’s nostrils of the terrible aromas of earlier. Cat noticed all the disembarked passengers walking towards a tall brick wall with some steps positioned at regular intervals to allow access to the higher sections. Cat tagged along behind the humans, and one of their number threw a piece of chocolate. But he was not a chocoholic cat and ignored it.

On reaching the top of the steps Cat saw the wall stretch out for miles and miles into the distance. He walked silently along the parapet for a kilometer or two enjoying the forest scenery, going from brick tower to brick tower, before scampering down into the open forest. None of that annoying desert sand out here, thought Cat. And it’s a long way from dead-cat-city. Think I might hang around these parts for a little while longer thought Cat. And that’s just what Cat did.

Back in Saudi Arabia MB relaxed in his hotel lobby, giving an occasional thought to Cat and his wish that Cat would have a good and safe cat-life. Thank God that Cat is safe and well in Dubai, though MB. Hopefully by now Cat is thinking of settling down and starting a cat family. Looking for a suitable Mrs Cat. And not in some unsafe-for-cats location like Vietnam or North Korea. Or China.

The bus arrives. There’s a cat called Cat hidden underneath.

Cat sees the wall up ahead. 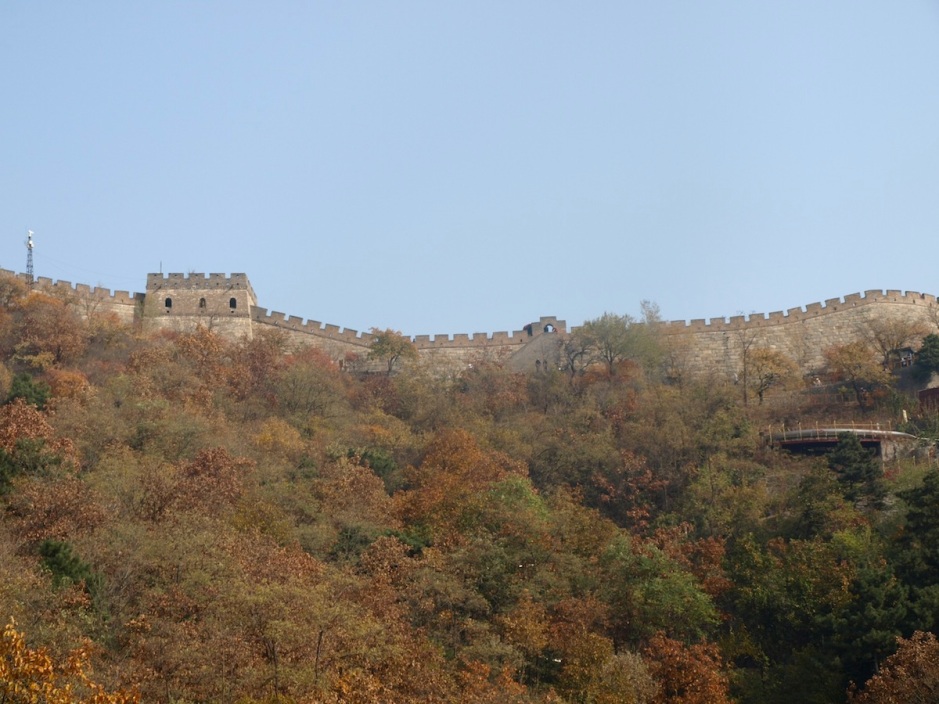 Cat is happy to see fruit and nuts for sale. And no cats.

Cat enjoyed walking on the wall. 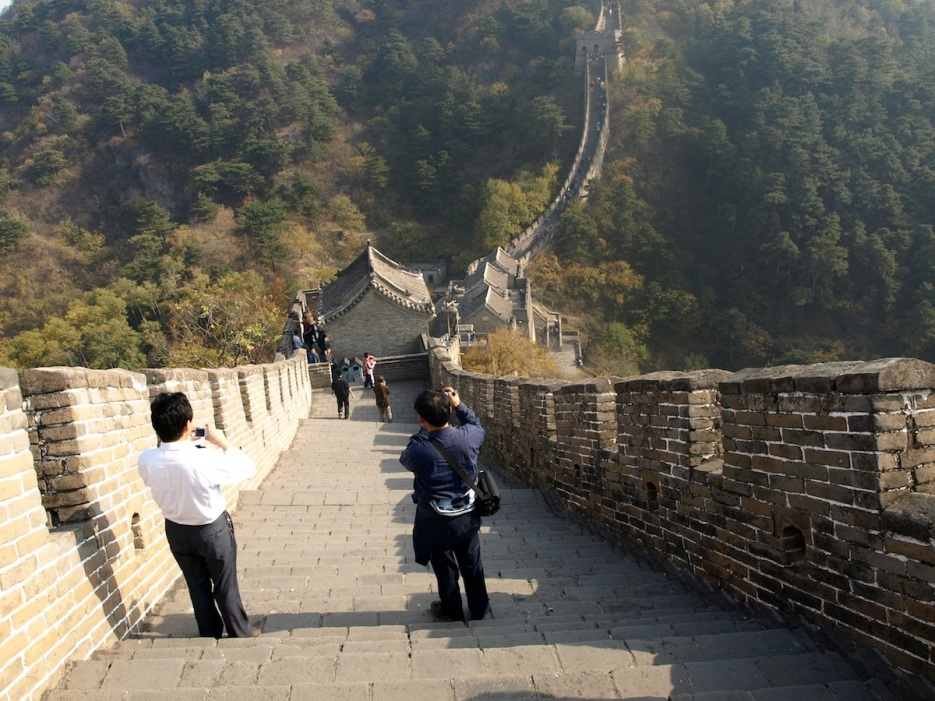 Cat was impressed by the long brick wall stretching for miles into the distance.

A sign that Cat could not read. Because Cat is Arabic cat. He is not an English or Chinese cat.

Cat likes jumping on the steps. 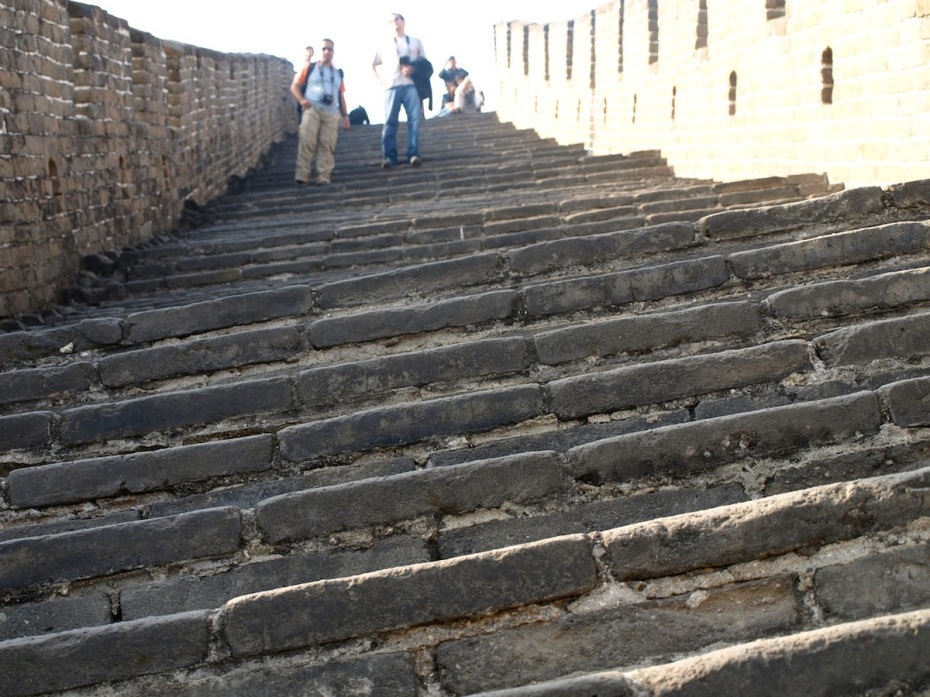 Local girl looks on as Cat escapes into the forest 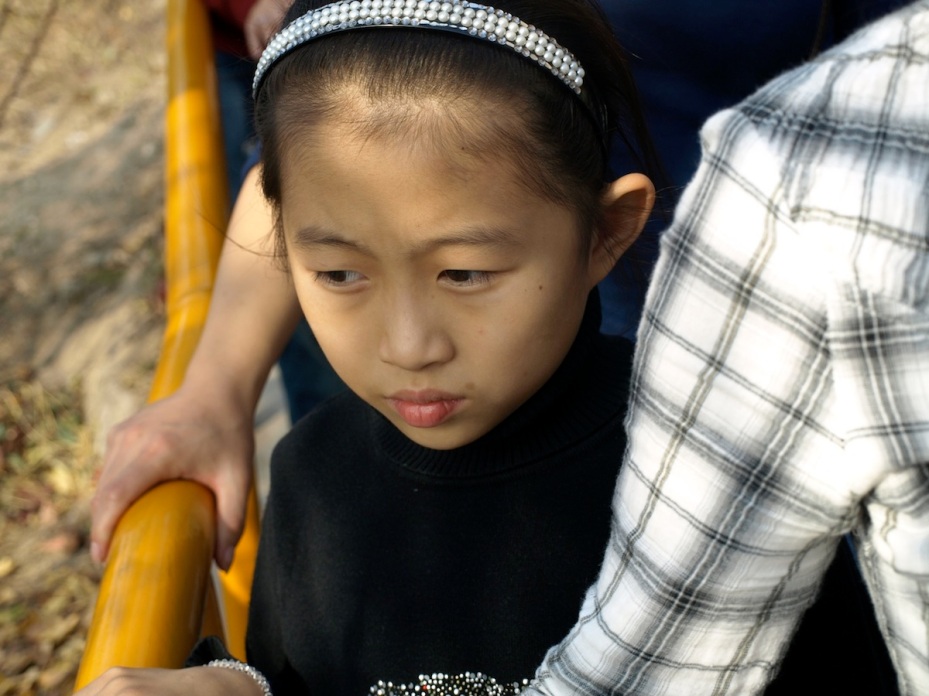 PS – Thanks to the Gypsy!