Love Is In The Air

Morning Crossers
Its 5am on a fresh Friday Riyadh morning. MB fell asleep too early last night and arose before cock-crow. The muezzin is belting out the call to prayer to the Muslim faithful. Those who wish to attend the nearby Mosque have 15 minutes to get there for first prayer of the day. Should they so chose. 99.9% will give this one a skip. But almost all will attend the midday prayer later on. One of the hotel staff has just rolled out a prayer mat in front of MB, and is now on his knees facing Mecca. Doing his duty for the 3 or 4 minutes it takes.

Big week past in the Middle East for many reasons. The nuclear deal with Iran was very welcome news earlier in the week and will hopefully make this region a safer place in the long run. The Israelis are railing against it, so lets hope they are wrong and this thing all works out to the good.

Dubai made world news midweek when they landed the World Expo 2020, an event held every 5 years to publicise the products and services of all countries who participate. Shanghai hosted the event in 2010 and MB is aware from some Chinese lads he knew at the time that the city got a huge economic boost as result. So lots of optimism and hoopla in UAE for last two days since the announcement. All the kids (& teachers) got free day from school yesterday on account, which coincides with the UAE National Day weekend, so an extended long weekend for all. Lots of forecasts of many new projects in the coming years, so good news for the entire region, where unemployment is big issue. 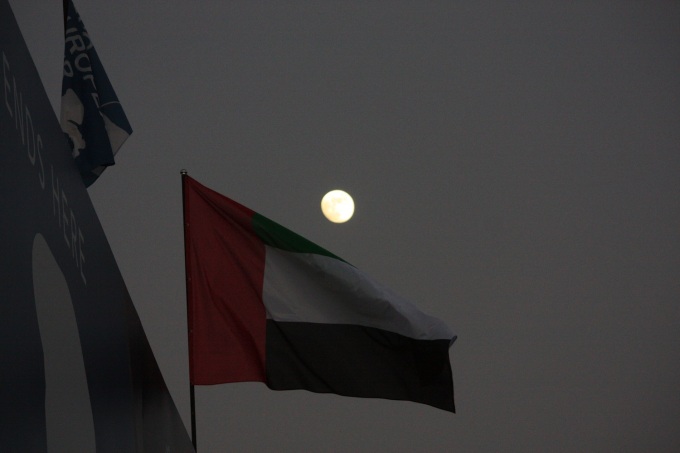 MB took a trip out to Riyadh Golf Club last weekend. Yes Crossers, golf in Saudi Arabia! MB had heard of the club from some Irish guys earlier in the year and invited young Saudi pal Mr Mo along for lesson. Mr Mo, like most Saudis, knows very little about golf and was not even aware that a club existed locally.

Was an experience to even find the course as MB did not have (and does not possess) sat nav. After numerous calls to the club office, a sign giving direction to the club was discovered and a few minutes later MB & Mr Mo were through the gates heading for the driving range. The direction sign a few km back did not inspire much confidence, and MB made it the subject of a separate post few days back, as it was bit unique, to put it mildly. But despite the 3rd world type sign the club itself and driving range were good and not much different from home. The club house was spacious and reasonably modern, and the food was tasty & good value for money. The Pro Shop was like all Pro Shops, selling golf branded gear at excessive prices. But golfers are usually not 3rd World types and exist to be milked. MB purchased a cap that says Riyadh Golf Club on account of fact that MB though it would be cool to have, and that is the name of the club! Colour blue – to match MB’s eyes!

If Mr Mo is typical of Saudi golfing talent, then it is safe to say that a Saudi golfer will not be winning a Major anytime soon. Ok, MB will admit that Mr Mo had never heard of golf until few days before the visit and didn’t know a driving range from a cattle range. So some understanding is in order. MB did his best to impart some golfing wisdom and technique to his enthusiastic student, but at end of lesson Mr Mo was still giving good demonstration of his ‘fresh air’ shot. Anyway, the intention is to attend again later today when hopefully Mr Mo will have bought some magazines, looked at some videos and allowed MB’s words of wisdom free passage from ears to brain. Hopefully today we will witness the transfer of that message from brain to hands. Inshallah! Rumour has it that Young Sudani lad will also join us. Sudan is also not a country renowned for its golfing talent, and its total number of majors won since old Tom Morris started belting around some sheep dung in some Scotland field all those years back amounts to – zero,  so anything (and everything) is possible later today at Riyadh GC. Update you all next week.

Today’s pics are of MB & Mr Mo doing their golfing stuff last weekend. Those Crossers who have seen pics or videos of the great Bobby Jones or Ben Hogan will recognise similarities with the swing of MB. A thing of graceful beguiling beauty!

Apart from golf Crossers, love is also in the air out these parts. Bangalore/India native and work colleague of MB – FAK – returned to Riyadh this week after 2 week trip back home. MB was aware for some time that family of FAK (FAK FAM) had been looking for a suitable young lady (SUL) for their 28 year old son for some time. MB had also offered his match-making services to FAK if required, and had set a limit of this coming Christmas for the family to solve the matter, before MB would intervene. But in the end this has not proved necessary. Even though the family had searched fruitlessly for more than 6 months they finally hit pay-dirt in recent weeks, and FAK flew home to meet the young lady in question, hoping that some magic might materialise. As it happens, FAK was very pleased to report to MB that indeed all had gone very well, the young lady was a cracker (MB’s adjective, not FAK’s) and that true love had blossomed immediately. FAK also showed MB some pics of the happy couple on his camera phone, and MB is pleased to report that both were beaming broadly.

So all appears well for FAK & SUL. But there is still one hurdle to cross. The family of FAK do not actually know the family of SUL. The introduction to SUL came through an in-law family member. So even though FAK & SUL are happy to be married and have agreed to do so, and the family of SUL gave permission for FAK to meet their daughter, so were presumably happy with the reports and investigations they had carried out on young FAK, the whole process can still come asunder should FAK’s parents have sufficient reservations about the parents and family of SUL.

So this coming Sunday, yes Crossers – this coming Sunday, the parents of FAK will visit the house of SUL, to meet and greet, sip tea no doubt, and perhaps take some food made by SUL and mother of SUL as they try to impress the future in-laws. Eyeball to eyeball – both sets of parents, plus SUL. Will be a nervous encounter for them all MB is presuming, and MB would suggest an early shot of whiskey into the tea, except they are all Muslim, so the haram alcohol will not be putting in an appearance.

Meanwhile, FAK is back in Riyadh waiting for news from home which he will expect early Monday morning. So fingers crossed for FAK that the tea was tasty, the food nice & spicy, and the vibes between the parents just like that Beach Boys song. Assuming the family blessing will be received, FAK has already invited MB to the wedding in the Sub Continent next September, which promises to be a great 3-day occasion with different parts of the ceremony on the different days. MB looking forward already, and inshallah the Lord spares MB the health until then at least. So Crossers, expect a short update next week, when MB will reveal whether it was a thumbs up or thumbs down for FAK & SUL. Here’s hoping for a thumbs up – from an excited and nervous MB!

Ok Crossers. Take it easy! Have a nice weekend.

The sign indicates more than one course. Not true. There is only one.  Albeit the sign will not need changing should a second be developed. 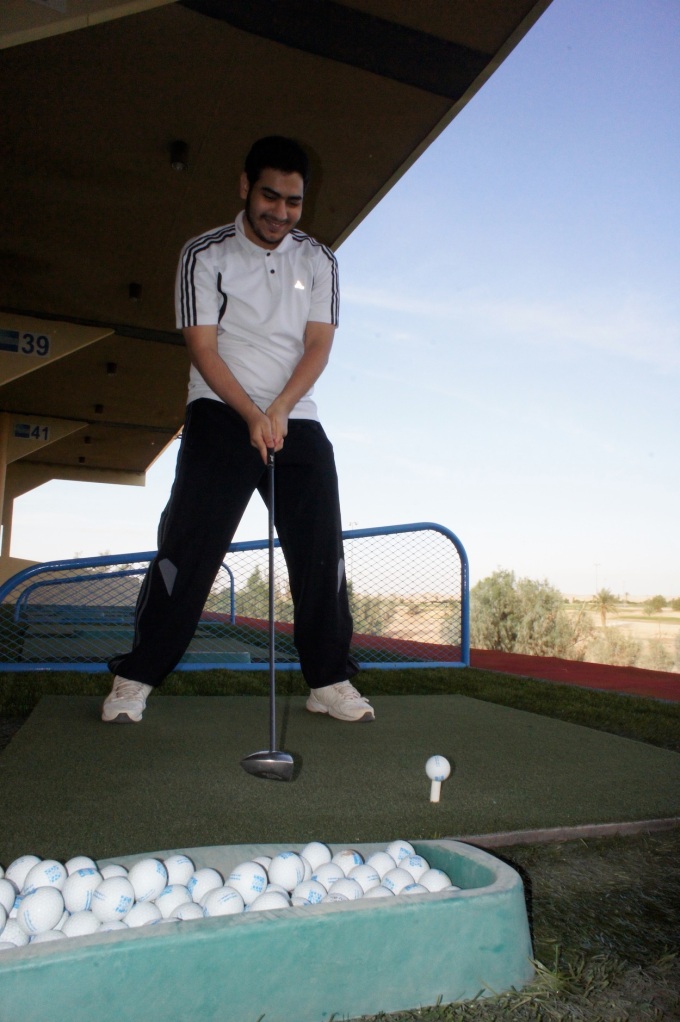 Mr Mo demonstrates his famous ‘fresh air’ shot. The swing is now complete but the ball remains on the mat! 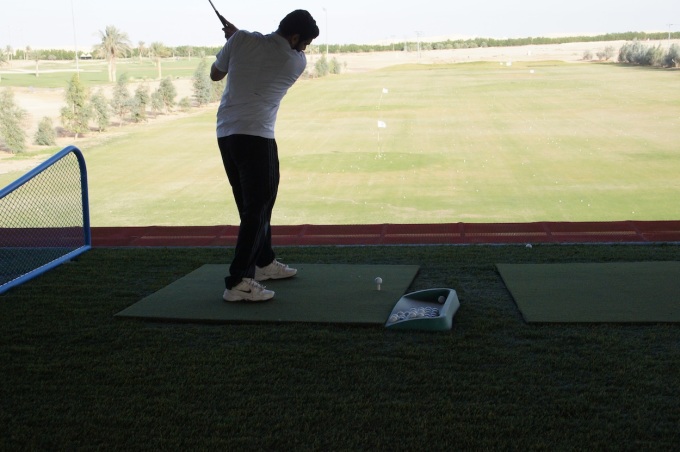 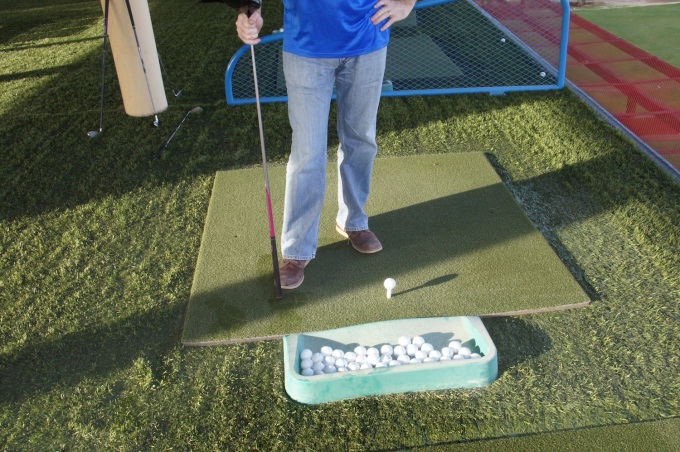 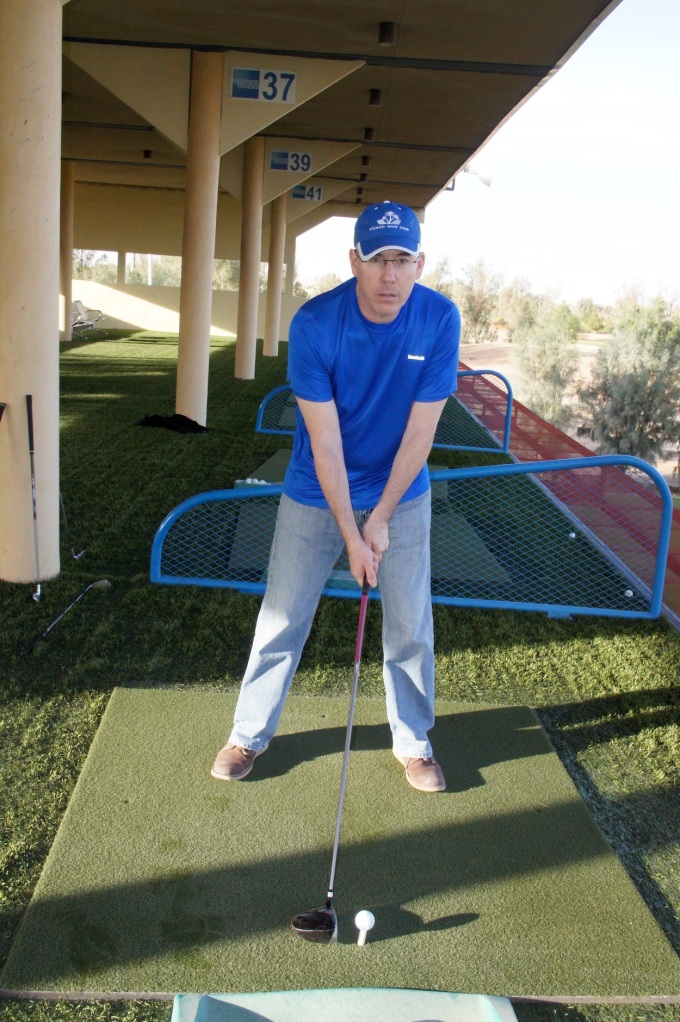 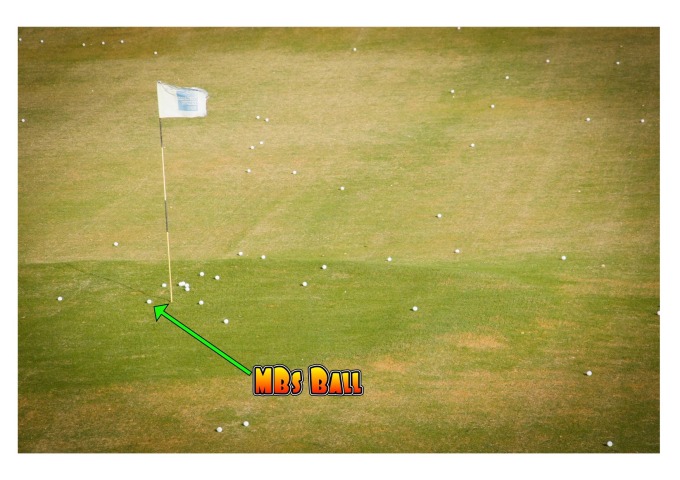 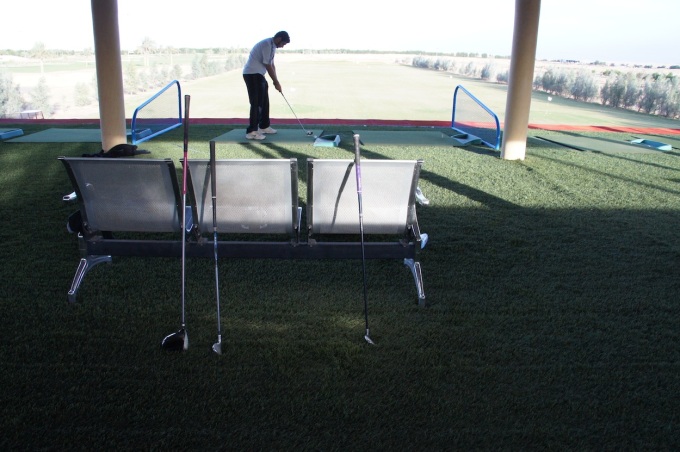 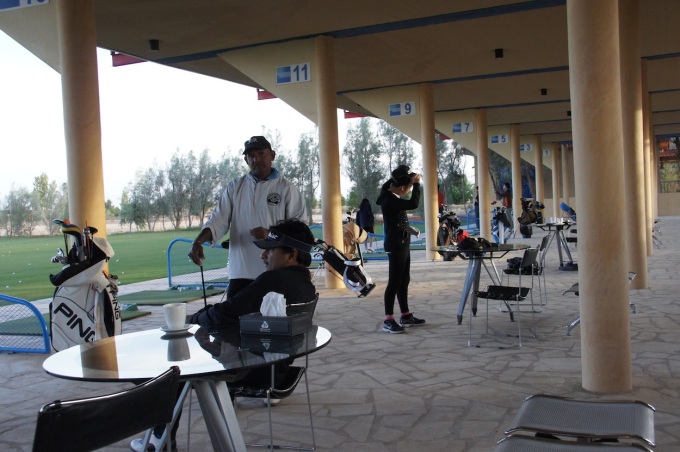 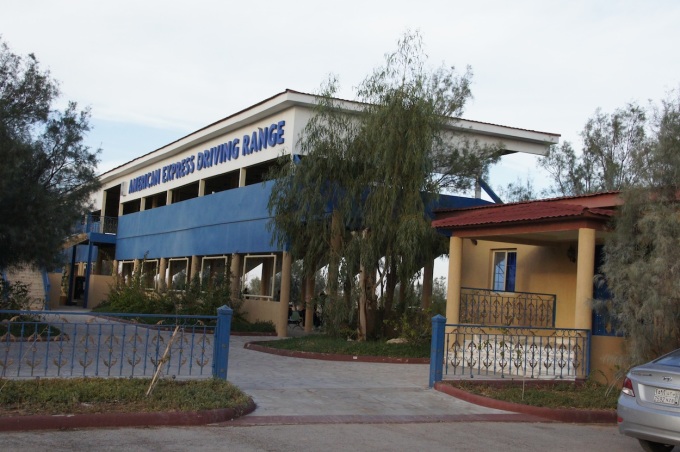 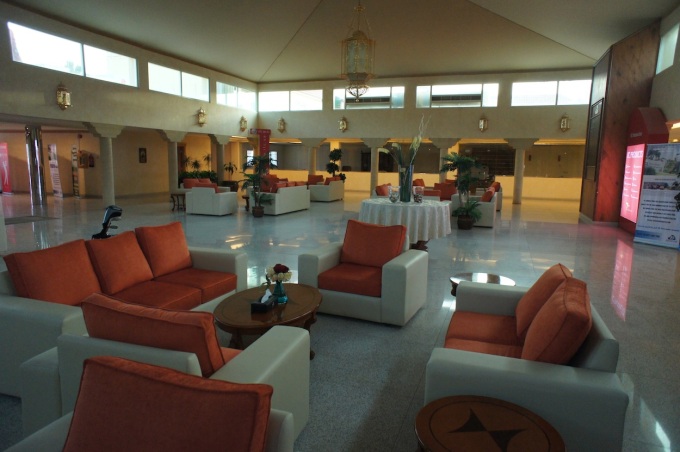 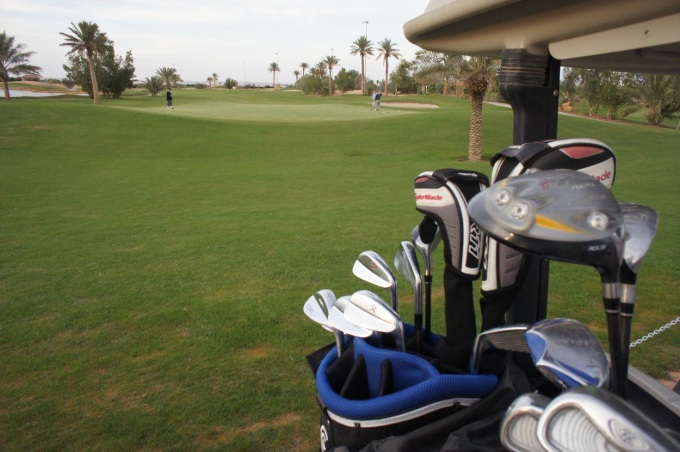 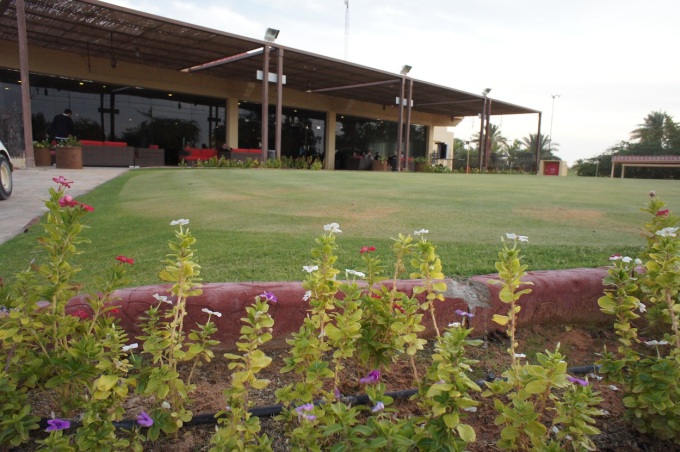 2 Comments on “Love Is In The Air”