Why Sri Lanka MB? Well lads, it was the religious Eid holiday in ME last week, so rather than stay glued to the laptop, MB took a look at the flight schedule of Air Arabia (our Ryan Air) out of Sharjah airport and saw direct flight to Colombo. Sounded an interesting sort of a venue, ticket was cheap, so MB signed up, jumped on the plane without even booking a hotel, and landed at 3.30am in morning in darkest Colombo airport. The airport is just over an hours taxi ride from the city center in an area called Negombo. But as MB had no accommodation booked, no point traveling more than one hour to be back to square one, when MB had arrived at square one already.

What to do after a long day, a four hour flight, and tired as hell?

MB saw two or three Government tourist offices near the airport exit, all advertising high end hotels and other local attractions, each manned by a single local individual. MB did his usual profiling analysis and approached the lad he thought most likely to be interested in a deal, where maybe some personal financial benefit might accrue.

‘Good morning my Sri Lankan friend’ said MB. ‘Good morning sir’ said the mustachioed local gentleman. ‘Hopefully you can assist me. I need accommodation for tonight, which is by now almost finished, and hopefully an establishment that will give MB a nice breakfast when he arises after few hours sleep. But MB is not interested in your high end hotels, he would have stayed in Dubai if he wanted that, hahaha’ said MB to the mustache. 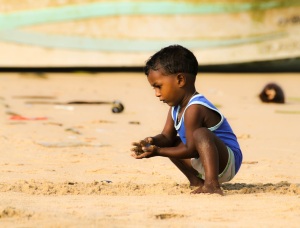 ‘Do not worry Sir, I have a friend’ replied mustache, as dollar signs appeared in his eyes and mobile phone slipped out of his pocket, followed by single digit dial to ‘friend’ on his speed dial setting and straight to his ear. An effortless graceful movement thought MB, honed to perfection no doubt over many years of dealing with predecessors of MB in similar circumstances. A few quiet murmurs as friend confirmed room was available, a few nods of the head from mustache in direction of MB, and MB was good to go. ‘You will not require a receipt I expect Sir’ said mustache. ‘Not at all my friend, who needs more paper?!’ said MB knowing the way of things in such places, as he discreetly handed over the cash out of eyesight of the competitor gentlemen only meters away.

MB was shown outside the terminal building, where minibus appeared mere moments later (all included in the deal), and off MB & driver went on the twenty minute journey to ‘Green Garden B&B’. ‘Friend’ was waiting outside on street when MB arrived, confirmed breakfast would be whenever MB arose from his slumber, showed MB to his room and bade him goodnight. 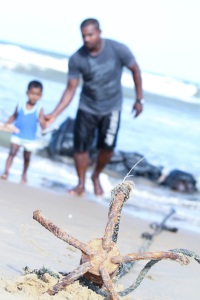 Actually lads, sleep was hard to come by, as bed & room were extremely third world, so MB was out of it approx 3 hours later at 8am, after lukewarm third world shower. Looking out bedroom window MB was pleasantly surprised to see the Indian ocean only 50m from his house. Some boats and fishermen and surfers were already hard at it in the morning sunshine. What to do lads, only grab camera and straight out the door. No sign of owner or other guests if any existed, so no rush with breakfast. Or anything else it seemed.

First thing MB noticed was lots of crows, and no sea gulls. Weird thought MB. Sea loving crows. And sea gulls who were scared of crows and had obviously emigrated to the no-crow lands. Never did get to the bottom of that one lads, but MB is not Professor of Natural History. But might sent email to Sri Lankan tourist board with crow/gull inquiry, just for the crack!

Anyway lads, walked down a short passage between some buildings, exiting under some coconut trees and onto the beach. Gorgeous place. And as luck would have it MB was just at location where the local fishermen pull up their small boats, mend their nets and sell their fish direct to local customers. And under the nearby coconut trees the fishermen and their families lived in a little village of very small houses. Shacks really, with only the most basic of facilities. Not many creature comforts in evidence. None actually. People eeking out a subsistence living from the small daily catches of fish they managed to land in their small boats.

MB got chatting to one of the fisherman and got invite to his house which MB was honoured to accept. MB & fisherman walked through a maze of little dwellings and arrived at his home. One of his colleagues climbed a coconut tree, a steel machete was produced which sliced off the head of the coconut, a plastic straw was inserted and MB’s meal was ready. MB sipped his coconut milk while he and the fisher lads chatted about life in general, fishing, coconuts and the deadly tsunami of 2004. 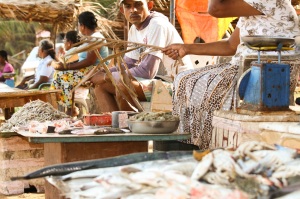 In the tsunami of Christmas Day 2004 fifty thousand people lost their lives in the coastal areas of Sri Lanka. But the deaths were mostly further south the fisherman explained to MB. He knew one family of twenty two people who perished – aunts, uncles, moms, dads, children – all dead. The village where MB now sat sipping the coconut milk had lost many houses when the water levels rose. Many new houses (shacks) were in evidence distinguishable from the older houses as they were built with concrete blocks rather than the timber of the older dwellings. At 9am on the tsunami morning the lower level of the beach was flooded. By 11am the entire village was under 1m of sea water.

MB bade his farewells, parted from the fisher lads and wandered back to the beach to take few more shots of whatever caught his eye. An hour or so later MB arrived back at Green Garden B&B where breakfast of Sri Lankan tea, a basket of white toast and a single fried egg was served up on the balcony outside the house. MB watched life on the street go by and took few more shots.

MB had no plans whatsoever for remainder of trip. And now applied his mind to what he would do next. But that’s another story for another day.

Enjoy the pics. Have a nice weekend. 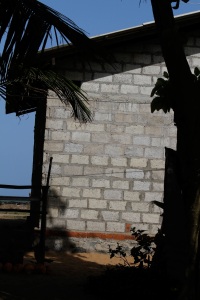 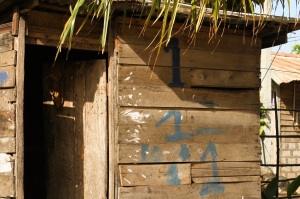 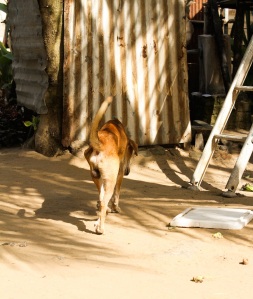 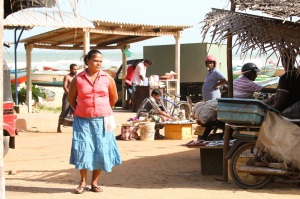 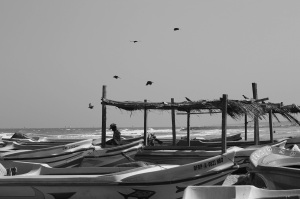 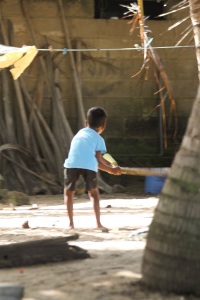