If you go down to the woods today,
you’re sure of a big surprise.

Yes indeed ladies, if you go down to the Irish woods around this time, be prepared for some strange goings-on and some big surprises. It’s not beyond the realms of possibility, at this time of the year, that you will encounter some real live Irish fairies. Following an unusually nasty winter when the weather was wacky as hell, and fairy activity was subdued and minimal, the fairies are now rarin’ to go and full of mischief and trickery.

Are the fairies like the Leprechauns MB? What a stupid questions ladies. The fairies are nothing like Leprechauns. Leprechauns are good-hearted, generally go about their business in as humble a fashion as possible, and are even willing to hand over their pots of gold to anyone (like MB) who is fast enough and clever enough to catch them while a rainbow momentarily blinds their vision. And there will be absolutely no hard feelings from Mr Leprechaun if you do manage to snatch the gold. You can just waltz off into the distance with the pot of gold in your grasp, considering how much bitcoin you might invest in, and Mr Leprechaun will just wave you off and wish you well.

The fairies, on the other hand, can be nasty, it must be said. They like to play tricks on the natural people, who are expected to grin and bear it. The only protection from fairy nastiness is to scatter some primrose flowers around the perimeter of your farm and they will never cross the primrose line. Don’t ask MB why ladies. That’s just the way things is.

May eve is fast approaching when fairy activity will be at its peak. Be warned. You may find that your cow has run dry and can not produce any more milk. Or you pet goat isn’t feeling very well. Or your sheep gets a sore throat and ‘baa’ suddenly sounds like ‘baaaggghhhh’. Yes, dear followers, should any of the aforementioned happen to you and yours, then for sure its the fairies at work and you need to tread very carefully indeed.

Anyway, now that MB has given you all some advice on how to deal with the Irish fairies, he is happy to share an image with you all of a fairy house he managed to capture in recent times back in the HX heartland. For sure MB is not a liberty to divulge the exact location of the shot, as he is mindful of the health and welfare of his sheep and goat herd. He will only say, that he wore a crown of primrose flowers, granting him invisibility from the HX fairy hoards, and beat a hasty retreat from the fairy village back to the natural world in the immediate aftermath of the shot. And lived to tell the tale.

Herewith (and be warned – sharing any shots of a fairy house is not advised): 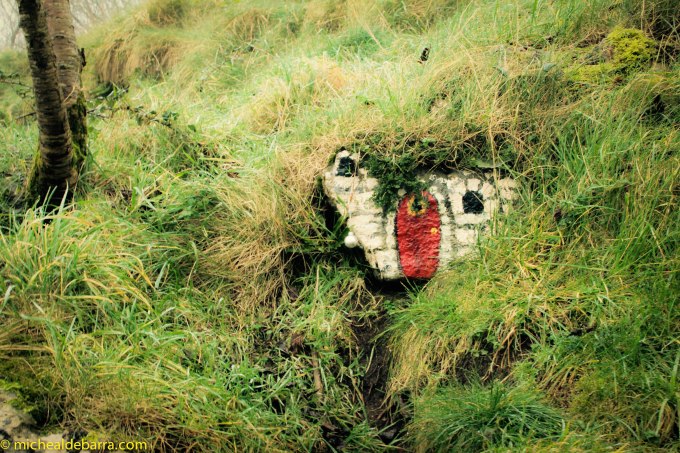