The Idea
Have decided to post a photo per day for 30 days, each based on a word or theme. The deed is now done and we reach 30/30.

Photo 30/30
MB went out last night to view and shoot the meteorite shower called the Camelopardalids. Dubai Astronomy Club publicised a gathering under the nighttime desert sky at Bab Al Shams desert resort when we would see the ‘once in a lifetime’ event.

‘Camelopardalids shower may prove extraordinary’ rang the headlines. Anything between 200 & 1,000 meteorites per hour were expected and viewers would be held in spellbound awe. Approximately 2,000 people showed up with MB, and we grabbed our sandy patch on arrival.

One or two of the gazers informed MB that they did catch a glimpse of 2 or 3 of the elusive beings. But MB was not sure if gazing for so long into the star laden night sky had not provided an hallucination or two in their brains. Maybe. Maybe not. MB can categorically state that he did not see any shooting stars/meteorites.

MB did witness distant planes as they flew into Dubai or Sharjah airports which are both relatively nearby. And someone lit a red Chinese lantern – which glowed brightly as it burned and rose into the heavens. MB assumed one of the Astronomy Club lads lit it, to remove thoughts of lynching from our minds. Some distant cars passed into the night providing opportunity for light trails in your photo, if you were of a mind to shoot light trails at ground level, when the ones you really wanted were in the sky.

And so it ended. MB packed up his gear at 5am and headed back to his car. Tired and meteoriteless. But gazing into the heavens at nighttime, with a gentle desert breeze blowing, while lying on the sand with a comfy pillow under your head and a plentiful supply of chocolate to hand is not a bad way to spend a Friday night. Occasionally.

MB gives you one of his pics from the evening. A couple of stargazers stand ready to capture the ‘200 to 1,000 per hour’ spectacle (not!!!), the lights from a nearby village shine brightly behind them, the headlights of a passing car leave a bright trail of light on the bottom right, a desert tree is lit up by the lights of the adjacent resort and some stars pepper the night sky. 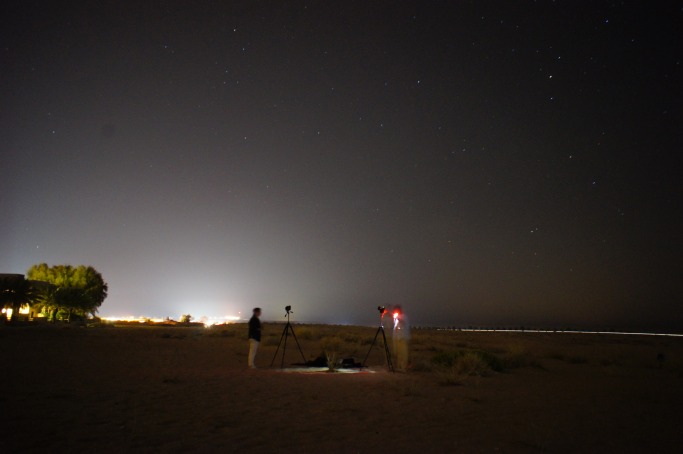