It was not until MB arrived in the Middle East (ME) some nine years ago that he learnt the true value of his Irish Passport. Compared to so many other nationalities who abide in the ME, MB and his like come from Passport heaven. When MB refers to “his like” he is, of course, referring to (mainly) Western Passport holders like himself, whose Passports allow Visa free or Visa assured travel to some 170 or more countries around the globe, similar to other EU countries, US, Australian, Swiss and certain other ‘Passport Heaven’ countries. MB could introduce a racial angle here and mention ‘White’ countries instead of ‘Western’, a fact often mentioned by Young Sudani Lad, a friend of MB whom MB has mentioned many times in older posts. And in truth, there would be some truth in Young Sudani Lad’s statement. However, let’s not get into that one today!

MB just looked up a 2017 Passport ranking website and can see that of the top 30+ Passports in the world, 4 are from Asia (Singapore, South Korea, Japan, Malasia), and the remainder are from so-called Western countries.

Anyway, MB did not invent Passports, nor did he invent the ranking system. He, therefore, assumes no blame at all in such regard. All of that results from the accident of one’s birthplace. If followers are lucky enough to have been born in a highly ranked Passport country, mabruk (congrats) to you & yours, and if you didn’t, then MB expresses his sadness at your bad birth luck.

Examples. MB has friends in Crimea and Lebanon. Crimea is presently the subject of an international dispute between Ukraine (to which it belonged for many years) and Russia (to whom it belonged historically). The present international sanctions on Russia are primarily a result of Russia’s so-called annexation of Crimea. Russia will counter that the Crimean people had a free vote and voted to return to mother Russia. But let’s not get into that one today! To live in Lebanon, like very many countries in the MENA region (Middle East/North Africa), is not to live in a great country from a Passport point of view, due to past and recent ME history.

The result of all the foregoing is that MB’s Crimean friend finds it extremely difficult to travel anywhere, particularly to Western countries, and one of MB’s Lebanese friends was recently refused a holiday visa when she and husband tried to visit Russia. So their holiday plans had to be cancelled at a late stage, losing the hotel booking fee, and too late to arrange anything else.

All the above came into the mind of MB yesterday, as he collected his new Irish Passport in the Irish Consulate in Doha. There is no Irish Embassy in Qatar, Qatar being covered by the Irish Embassy in the UAE. The Embassy staff visit Qatar one day per month, set themselves up as a temporary Consulate in the Business Centre of the Grand Hyatt Hotel for 3 hours in the afternoon, and deal with consular and embassy matters for the approx 2,000 Irish nationals who live and work in Qatar. MB made his application for a new passport at the end of July to the visiting Embassy guy, and received an email earlier this week that the new Passport was already issued and could be collected on 24 August at the same Grand Hyatt venue. And so MB did, receiving the new, and having the old one cancelled at the same time. Easy peasy, lemon squeezy!

The new Irish Passport (MB’s fourth!) must be the coolest Passport in the world. On each page, it’s got some or all of the following – musical note symbols, Irish calligraphy (google ‘Book of Kells’), Irish poetry in both Irish and English languages from some of Ireland’s famous poets, sports and cultural themes, famous buildings, etc etc. It’s a really ‘wow’ Passport MB is thinking, guaranteed to get all Irish brothers and sisters free and safe passage through the non-Irish lands. Even if the Irish passport is not ranked Nr 1 in the above ranking site, MB is sure that when the next ‘Coolest Passport’ ranking is issued, MB’s new Irish passport will be top of the tree! 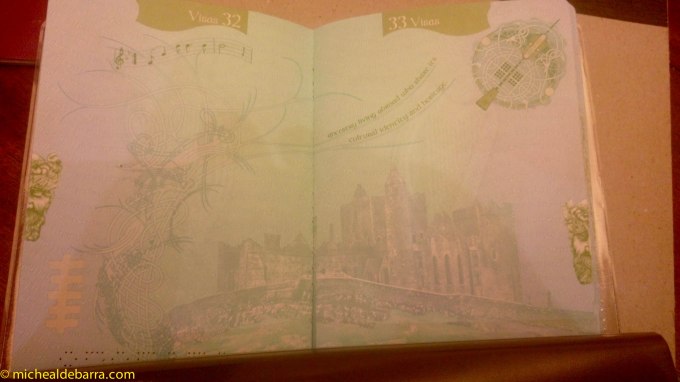 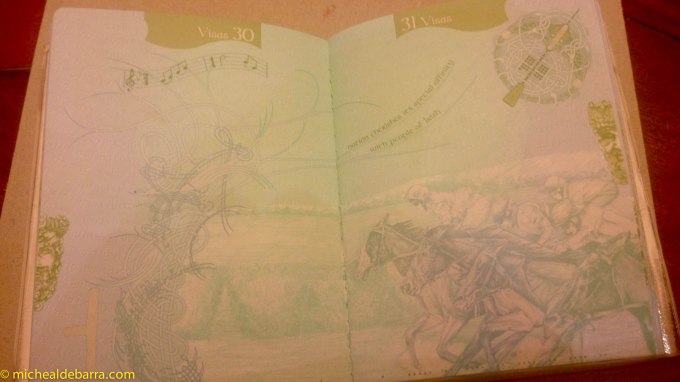 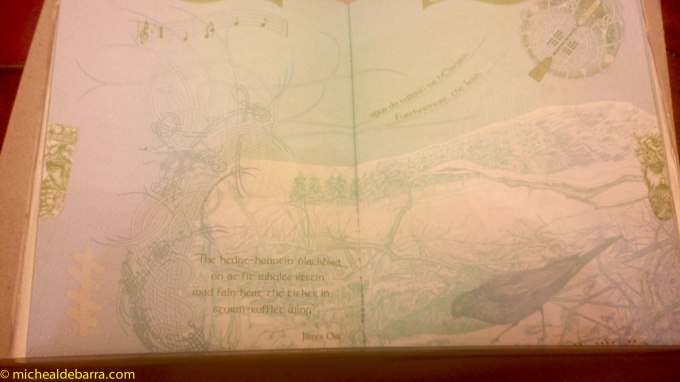 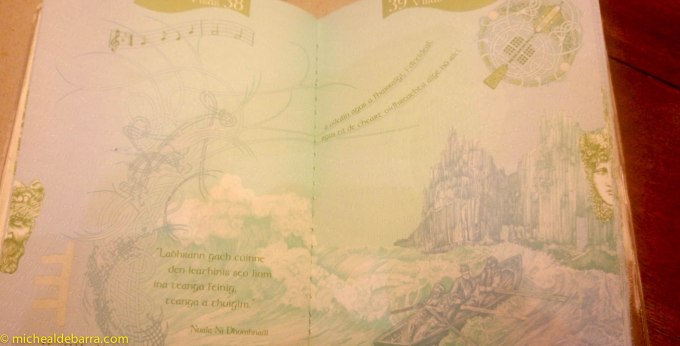 2 Comments on “A New Irish Passport”