MB headed out early one morning in the final days of his trip home. He was at the lake not long after sunrise and was at the Grange Stone Circle approx 8am.

The Grange Stone Circle dates from the bronze age, making it approximately some 4,000 to 5,000 years old. Other local monuments date from an earlier age.

Some might consider that it dates from an older age, but exploratory excavations carried out in recent years down to levels below that of the circle, have discovered evidence that would appear to confirm the above approximate age of the structure. There is further exploratory evidence that there has been continuous human habitation in the HX/Grange/Lough Gur area since that time. That’s a lot of time!

The 113 stones were transported, probably on circular shaped logs rolling along the ground, from a nearby rocky hill called Knockderk. In years past, not too many, this hill was used as a quarry to produce stone for civil engineering purposes.

When you point a camera into the sun, the camera will automatically darken the photo. So the below photo seems as if it was shot a little earlier – just for those interested in the mechanics of cameras & photography. One friend commented that he thought the below shot was taken much earlier in the morning.

From the loughgur.com website. For the record – MB does not agree with some of the content:
Composed of 113 standing stones, the Grange Stone Circle is the largest and finest in Ireland. It was built c. 2,200 B.C. after the arrival of the Bronze Age People in Lough Gur. It is a ritual site akin to our churches of the present day and also served as an astronomical calendar. We can only speculate on the rituals which took place here but know that they were of great importance also to people from surrounding settlements. The circle is aligned on the sunrise of the summer solstice. Included in the archaeological finds were thousands of sherds of Beaker pottery. The breaking of Beaker pots against the standing stones seems to have been part of a ceremony. The largest stone is called Rannach Crom Dubh and is over 40 tonnes in weight and was transported over a distance of 3 miles. 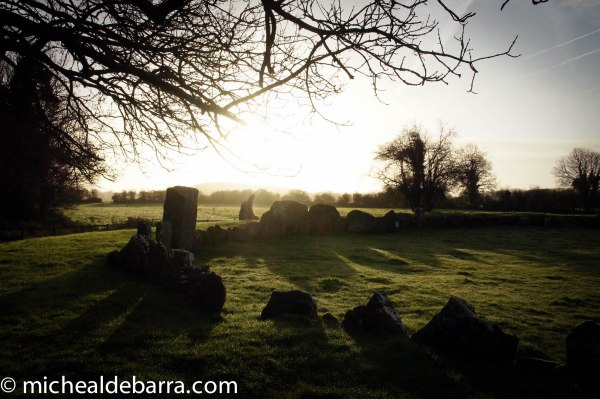